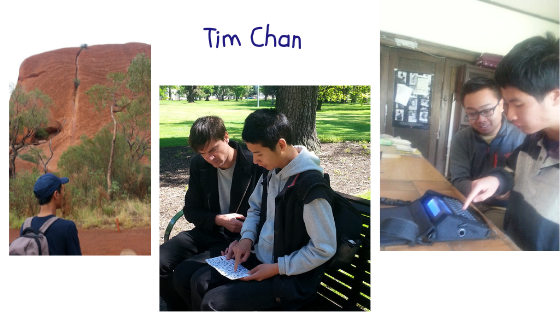 This was written by Tim Chan in 2012 and is being published with his consent.

My name is Tim Chan, I am 17 years old with a Chinese Australian background. I like books, swimming, cycling, and roller-blading. I have moderately severe autism.  I don’t have speech, and a lot of mannerisms such as humming, flapping my hands, and lying on the floor when I get too stressed out.

Unlike many nonverbal people with autism, I do and can communicate using typing with some support. This mode of communication is called Augmentative and Alternative Communication (AAC) and typing with another person’s hand on my arm is called Facilitated Communication (FC).  When I first learned to do FC, about 7 years ago, I needed support at my wrist. Now I can do FC with minimal support, just a light touch at the shoulder or the back from my communication partner.

Most neurotypicals (a general term for people without autism) have little trouble their body, and the intention to do something is translated into the necessary actions to achieve the goal. On the other hand, we autistics cannot rely on our bodies to carry out our intentions. If I want to say something, no word comes out. This is also the case with hand movements, like writing.

Most of my time at school has been spent on trying to see the meaning of what people do and how to incorporate the routines into some understandable sequence. With no speech and no independent means of communicating, I constantly feel left-out, isolated and freakish in an alien world.

The main problem, though, is the way people judge me at first sight. I make sounds, not voluntarily, but squeals and hums when my anxiety is getting on top of me. In unfamiliar situations, I don’t cope well, because I don’t know what to expect. When I get overwhelmed, I do repetitive things like look at spinning objects to calm myself down. Otherwise, the stimulation becomes intolerable. Sometimes lying on the floor helps too. Because I can’t tell people about these sensations and about my coping strategies, people often look askance.

In the absence of speech and behavior that signals a request for attention, such as eye contact, gestures and smiling, the need of AAC users to communicate often get overlooked. Our means to communicate are also severely restricted. Pointing is something I have to learn to do. The things we need are not always confined to concrete objects in our field of vision. Often, people have to guess our intentions, and impose on us their interpretation and satisfaction of our needs.

Our success at communication very much depends on people’s willingness to accept us and believe in us as individuals with legitimate, albeit complex needs. The positive mindset of others is crucial, and termed ‘presumption of competence’, this attitude is what makes or breaks us in communicative situations.

When my attempts to use AAC were initially thwarted in mainstream high school, my frustration and anger mounted. I withdrew into myself and gave up trying to blend in.   In despair I would sometimes act out my frustration. I threw things, hit out even and ran away from the Aides. I hated myself for doing these things, yet was unable to stop because of my intense frustration. Also acting in destructive ways usually got me what I wanted, Mum was called up to take me home, to be followed by suspension from school. I felt like I was released from prison, but I was also feeling like a delinquent.

After a concerted effort from Mum with the help of our advocates to negotiate with the school for using FC, and for inclusion, the process to enable me to communicate lurched forward. I first started to type with an Aide in Year 9.  I was able to type short sentences in response to questions, and finally convinced the school that I had brains. My Aide was proud of my achievements. I am lucky as I take in things from the environment by osmosis and so amass quite a bit of knowledge without even the need for deliberate learning.

In Year 10, we were lucky to have a new inclusion team looking after me. There were two new Aides assigned to help. Using FC, I sat for tests or School Assessments (SACS) and exams with facilitation from the Aide, and for the first time, felt a sense of satisfaction and accomplishment when I achieved above average results. Things started to change for me, I felt a level of acceptance, not only from the Aides and my teachers but also from the other students. I began to look forward to school.

I have embarked on my VCE this year. For my future career, I would really like to help people with a disability, who, like me, face immense hurdles every day. With this in mind, I’d like to do law at University and to get work as an advocate for people with a disability. To aim high is the first step towards a life that is fulfilling. I am also hoping to get to independence with typing.

My experience as an AAC/FC user is that with FC, people need to be open-minded and ready to listen without judgement. I believe that without the means to communicate, people without speech are reduced to mere shadows, without the right to claim their humanity. For me learning FC was a huge watershed that enable other people to acknowledge me as an intelligent person who is basically similar to them. With FC I can take part in things which are meaningful and live a richer life.

Zoom in / out
Accessibility by WAH